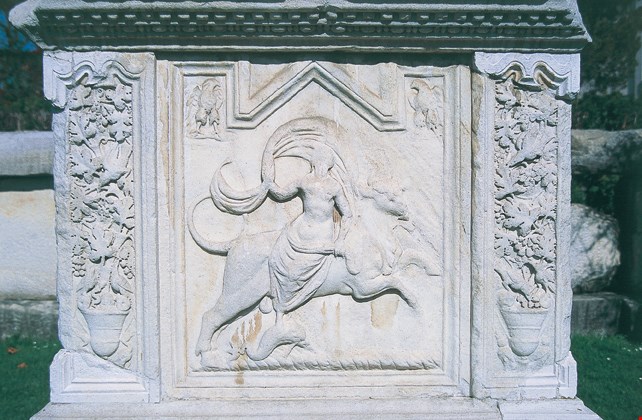 Almost 2000 years ago, a very important Roman road led through Šempeter: Aquileia – Emona – Celeia – Poetovio (L’Aquila– Ljubljana – Celje – Ptuj). Many wealthy Romans lived nearby and some of them were buried in the tombs of the Roman Necropolis in Šempeter.

The necropolis was discovered by accident. In 1952, locals were working in an orchard and found a statue of a sitting woman. A few years after the excavations, the Roman Necropolis archaeological park was opened. To this day, the park is one of the most important and best-preserved monuments from the Roman era in Slovenia and Central Europe.

Since the discovery of the Roman Necropolis in Šempeter, more than one hundred family tombs have been excavated. The best preserved are the large tombs made of Pohorje marble, which are decorated with statues of the families that are buried in the tombs. The Spectatii tomb is especially notable because of the reliefs of seasons, and the Ennii tomb shows the mythical scene of the abduction of Europa.  Each of the tombs tells its own, 2000 year-old story, describes ancient mythology, and talks about the life of ancient Romans.